Being able to quickly turn a single-threaded application into a multi-threaded one is one of the Holy Grails of programming languages these days. Modern pure functional languages offer the most obvious alignment with these goals, but what if you prefer imperative programming?

I’ve been using Rust for a few years now. One of the basic ideas behind Rust is that, by telling the compiler more about your intentions for the code you’re writing, the compiler can enforce them and make sure it’s more correct. Those of you who currently worship at the altar of const-correctness in C++ will likely fit right in.

This has some interesting ramifications:

Rayon is a cool new library written in Rust. The basic theory behind it is that you can take anywhere you use an iterator - and just turn it into a parallel iterator. That’s it, now your code is multithreaded. Internally, it also has a work-stealing queue, and has deep customization, but I wanted to see how easy the out of the box experience was.

I had the perfect candidate lying around already - a path tracer. A raytracer is a great model for multithreading, because it’s trivially parallelizable. In my model, each pixel of the raytrace job doesn’t care about what the other pixel does.

Let’s take a look at the main loop of my raytracer before it was parallelized with Rayon:

It’s pretty straightforward. For each pixel of the target image, we dispatch number_of_samples rays with some random offset, and then combine the result to get a final colour for that pixel.

After adding Rayon, the main loop now looks more like this:

We had to drop the for-loop and convert it to an iterator/lambda-style syntax, but that’s the big code change.

It wouldn’t compile, complaining that a lot of my raytracer types (materials, geometries, etc.) didn’t have the Sync trait. In Rust, think of traits like you would interfaces in other languages. In the specific case of Sync, it’s a “marker” trait, which tells the compiler that it is safe to share a reference to an instance of the type between threads.

The whole commit was only 15 lines of code, and now I have a multithreaded raytracer. Is it any faster? Well, on my mid-2012 Macbook Pro, it took a large scene from 303 seconds to only 93 seconds to render. That’s a pretty good return on investment!

I’ll be continuing with this raytracer in the future, but for now I’m pretty pleased with how Rayon has worked out for me.

And since you can’t be expected to read an entry about a raytracer without seeing a picture: 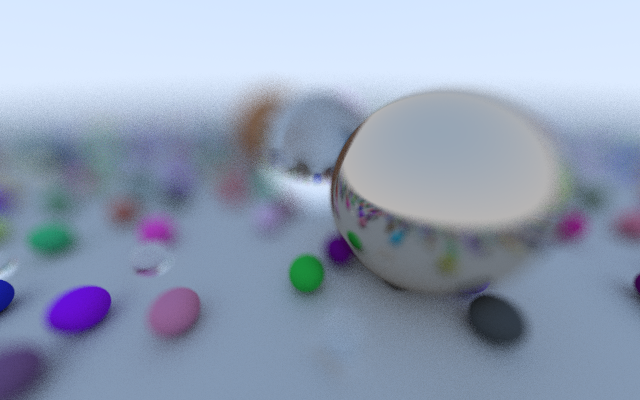 « Macintosh Toolbox with THINK C Lessons from Modernizing with Elm »